Wally the llama’s antibodies, analyzed in J’lem, may help millions through COVID – The Times of Israel

Antibodies from a single llama that were analyzed in a Jerusalem lab could be replicated and help “millions” of coronavirus patients, scientists say.

Dina Schneidman-Duhovny of the Hebrew University of Jerusalem has examined the qualities of dozens of antibodies from a llama called Wally, and identified which would best fight the coronavirus in humans.

The best candidates have been tested in vitro by her US-based colleagues with live coronavirus and human cells, and appear to significantly reduce the virus’s ability to infect cells.

As the llama antibodies are much smaller than human antibodies — they are often dubbed “nanobodies” — they are simpler and cheaper to replicate artificially. Researchers say they would not need to be taken intravenously, unlike human antibodies, and could be dosed via an inhaler, which is already being developed for clinical testing.

“They are highly potent,” Schneidman-Duhovny told The Times of Israel, adding that the nanobodies have the potential to help millions of patients. “The antibodies stick to the virus and just don’t come off, almost acting like glue. The antibodies are also very specific, targeting the novel coronavirus very precisely.” 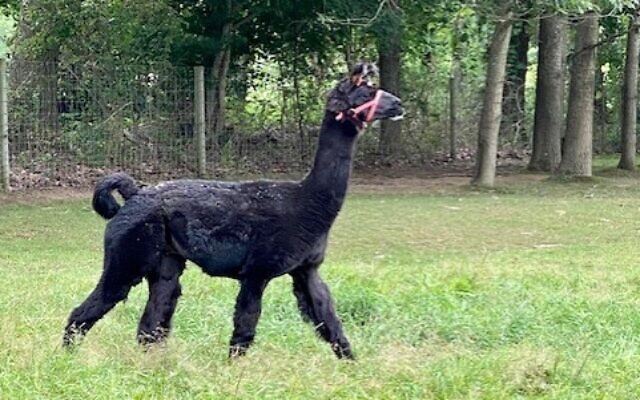 Wally the Llama, at home on a Massachusetts farm. (courtesy of Dina Schneidman-Duhovny)

She added: “Unlike the types of antibodies that are currently available, such as those given to Donald Trump, these can be made very easily and cheaply.” She explained that this is because they can be produced in microbes, unlike others that require a more complex process.

Schneidman-Duhovny, a computational biologist, has been working as part of a team led by the University of Pittsburgh, computer analyzing DNA data on antibodies that her US-based colleagues provided and creating models to assess which would be effective against the coronavirus.

Antibody treatments for the novel coronavirus are not a new idea, and neither is the concept of sourcing them from animals. Since early in the pandemic, antibodies from recovered patients have been administered, and now there are cocktails of synthetic antibodies, like the one based on human and animal antibodies that was famously given to Trump. 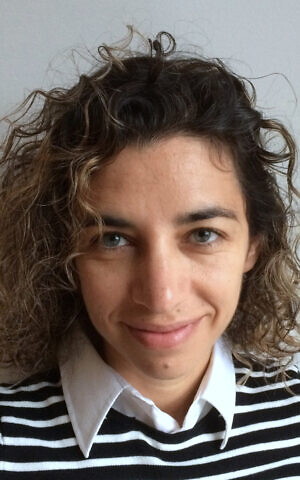 But Schneidman-Duhovny said that judging by their in vitro performance, her team’s antibodies are more effective than anything seen to date — including another attempt with llamas that has not yet led to a therapeutic product.

Her research, which has just been peer-reviewed and published in the journal Science, focuses on the potential of synthetically made antibodies, based on those produced by Wally, who lives on a Massachusetts farm.

Her team injected Wally with a piece of the coronavirus spike protein. After roughly two months, the animal’s immune system produced mature antibodies, which were extracted and replicated.

Schneidman-Duhovn said she is “excited” by her team’s antibodies, which she said will soon be engineered into a spray format and submitted for clinical testing.

She was already working on llama antibodies together with her University of Pittsburgh colleagues when the pandemic started. It was long before they had heard of the novel coronavirus — they were looking at general potential for repurposing the antibodies for humans.

Her main collaborator Yi Shi, assistant professor of cell biology at Pittsburgh, was nervous about focusing on COVID-19. 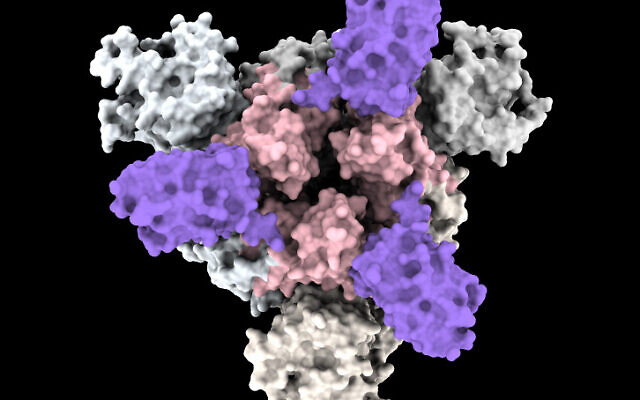 The llama antibodies, seen in purple, attached to the spike of the novel coronavirus, which is seen in grey and pink. (courtesy of Dina Schneidman-Duhovny)

Schneidman-Duhovn recalled: “He was hesitant because this is a very competitive area, and we’re both very early on in our careers, but I said the pandemic is out of control and we should really do whatever we can do.” Both researchers are in their 40s and neither has tenure.

Schneidman-Duhovn convinced him during a Zoom call to take the leap and focus on the coronavirus, and, at a press conference last week, he lauded the antibodies as “ideal for addressing the urgency and magnitude of the current crisis.”

Paul Duprex, director of Pittsburgh’s Center for Vaccine Research, outlined the process — and his optimism — during the press conference. “We mixed a minuscule amount of nanobodies with the live virus from a Munich patient, and we added a few drops of that solution to a plate of cells,” he said.

“Eventually, after a couple of days, we measured how well those nanobodies neutralized the virus and how many cells survived. What we found was really quite remarkable, just a minuscule fraction of those nanobodies could neutralize enough particles of SARS-COV-2 to protect millions of cells. That’s so much more effective than many of the other antibody therapeutics.”

Cyrille Cohen, head of the immunotherapy laboratory at Bar-Ilan University, who is not part of the llama team, told The Times of Israel that he considers the research “very interesting,” and noted that a product based on llama antibodies is already approved and in use for a rare blood disorder.

He said of the new coronavirus research: “On the good side, these are very stable antibodies and also small so that their shelf life might be longer than regular antibodies. They may act biologically at lower doses so that from a production standpoint, you may not have to produce enormous quantities, so you may able to use smaller doses.”

He added: “The potentially problematic thing is that these are not human antibodies, meaning that although they are smaller and easier to produce, when injected in the body they could trigger an immune response from the patient that will ‘attack’ and ‘reject’ these antibodies.”