Durham, N.C. — An infectious disease specialist at Duke University Hospital is one of the 44,000 people enrolled in Pfizer’s clinical trials of a potential coronavirus vaccine.

“It just seemed like the right thing to do, frankly,” Cameron Wolfe said. “We have to find some pathway forward here that’s not just allowing lots of people not to get sick, and if this was a small role that could be helpful in that, then I was happy to go ahead.”

Pfizer announced Monday that the vaccine candidate had a 90 percent efficacy rate, meaning than only 10 of 100 vaccinated people who test positive for the virus would get sick.

Although the preliminary results were based on results from only 94 patients, Wolfe called the 90 percent rate “incredibly positive.”

“You think of that in terms of flu vaccines, and we’re a good year if we get a 50 percent efficacy for a flu vaccine,” he said. “This is really quite profound.”

About half of the people in the trial were vaccinated against the virus, and the other half were given a placebo. Wolfe still doesn’t know which group he was in, but he hasn’t developed any COVID-19 symptoms. 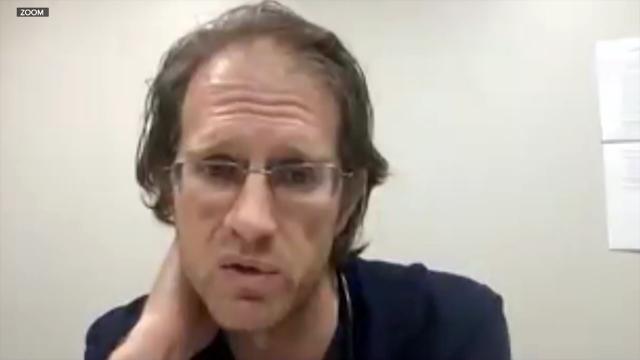 “The number of people who got the placebo who ended up getting COVID was far, far higher than those who took the vaccine,” he said.

Pfizer cautioned that the initial projection of efficacy might change by the time the study ends, and vaccine safety still needs to be reviewed. Wolfe said he’s encouraged the trial hasn’t been paused for safety concerns, like trials for some other vaccine candidates, but he said it remains to be seen how long immunity provided by the vaccine would last.

“Are they getting COVID that is potentially transmissible but they just have no symptoms, or is this a complete block on their future infectivity to anyone else around them?” he said. “Because if that [latter one] is true, that sort of becomes a great instrument to block the whole pandemic.”

Dr. Linda Butler, chief medical officer at UNC Rex Hospital in Raleigh, said the news from Pfizer is promising, but she’s looking forward to getting some specifics about individual cases in the study, including how effective this vaccine was for people who developed very serious symptoms.

Pfizer officials said they plan to seek emergency use authorization from the U.S. Food and Drug Administration as early as late November.

Meanwhile, she said, coronavirus infections will likely continue to rise in North Carolina and elsewhere in the coming weeks as colder weather drives people closer indoors and people gather for the holidays.

At UNC Rex, health care workers who come in direct contact with COVID-19 patients will be the first ones vaccinated, she said. It could take several months for more widespread distribution.

The hospital has in recent years conducted drills to see how many people could be vaccinated in one day, Butler said. That number is the thousands, so available doses will go quickly.

“It needs to be in a deep frozen state, sort of minus-80 [degrees], to within four to six hours of administration,” Wolfe said. “So this is not going to be something where we are going to just drive up to our CVS and get a flu shot.”

Wolfe said he’s confident the FDA will approve a vaccine only if it’s both safe and effective, but some health experts worry that a large segment of the public won’t want to take it.

“Well, I believe in the science, and as long as they are following the science and the CDC approves and Dr. Fauci will go take this vaccine, then I’ll be right in the line behind him,” said Martha Crampton, of Raleigh, referring to the nation’s top infectious disease expert, Dr. Anthony Fauci.

“I feel like they are being rushed,” Crampton said. “If the science says [it’s good] after they clear the markers they need to clear, then I’ll be confident. If that is not so, I will not take a vaccine.”