As coronavirus cases spike across California, three more Bay Area counties could backslide as soon as next week to a more restrictive tier in the state’s reopening plan — which would place new limits on businesses as the critical holiday season gets under way.

Napa and Santa Clara counties are on track to regress from the “moderate” orange tier to the “substantial” red tier in the state’s next assessment on Nov. 17. Solano County could move backward to the most restrictive “widespread” purple tier after hovering on the edge for several weeks.

They would follow the 11 California counties, including Contra Costa and Santa Cruz, that were bumped back to more restrictive tiers Tuesday. San Francisco also shut down indoor dining because of spikes in coronavirus cases. 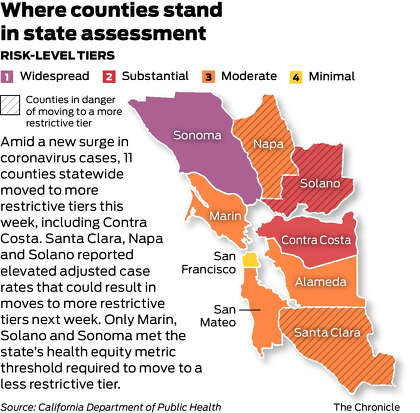 Placement in California’s four-tier reopening system is determined by three coronavirus metrics: rate of new cases (adjusted by the state to account for testing levels), rate of positive tests and a new equity metric.

Counties that fail to meet one or more of those thresholds for their tier for two consecutive weeks are moved into the next most restrictive tier — though counties can request to remain in their tier by presenting any mitigating factors.

Napa has been at risk of moving to a more restrictive tier for several weeks. At the end of October, the county’s adjusted case rate was 4.3 per 100,000 population, over the red-tier threshold of 4.

The most recent tier assignment shows Napa’s case rate has shot up to 7.7 per 100,000. While that rate actually falls within the purple tier, the state health department said Tuesday that counties can move back only one tier at a time, which would put Napa in the red tier. 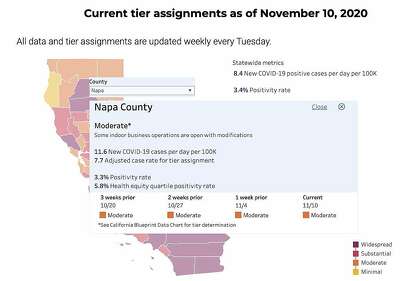 In a presentation Tuesday to the Napa County Board of Supervisors, health officer Dr. Karen Relucio said, “In the last couple of weeks, cases have risen basically exponentially.”

Relucio said the developments indicate “there is some complacency,” and the county’s move to less restrictive tiers was accompanied by a mistaken perception that “things are back to normal.” She said the numbers reflect public weariness with the pandemic.

Relucio said the largest share of Napa’s cases, 35%, are from unknown community transmission, so those infected don’t know where they contracted the virus. Other drivers are household transmission and gatherings, which might have included Halloween parties, trick-or-treating and other higher-risk activities within people’s homes. Out-of-state travel to higher-risk states is another problem, Relucio said.

The health officer also noted a lack of public cooperation with contact tracing. If the origin of positive cases can’t be identified, then additional transmissions go unmitigated and can lead to further spread.

Like Napa, the county has been at risk of tier backsliding for several weeks — but in Solano’s case, the move would land it in the most restrictive purple tier. Solano County Health Officer Dr. Bela Matyas said Wednesday the metrics improved last week for the county to stay in the red tier, but the current spike could send it back to purple for next week’s assessment.

“Things are definitely worsening,” he said. “We are experiencing what I think is genuine second wave.”

Matyas said if the county has to move to the purple tier, it will lodge an appeal with the state in hopes of getting one more week in the red. But by Thanksgiving Solano County could be back in the purple tier. 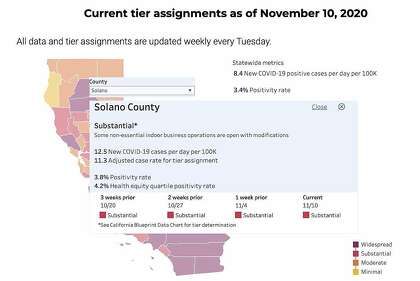 In late October, Matyas said “huge, inappropriate gatherings” were largely to blame for a surge in cases. Recently, he puts the blame on smaller household gatherings, and suspects many of them could be from Halloween. He added that this second wave seems to comprise more younger people including healthcare workers, some of whom work for congregate facilties that have seen ongoing outbreaks at 15 locations.

“I don’t think there’s a single explanation, I think it’s a lot of things including fatigue and apathy,” he said. “The fact that we’re going into holiday season, people are getting together with family and friends under the assumption they are safe, and they let their guard down.”

Matyas said if the appeal is accepted, it would buy some time for businesses that would face significant impacts if the county moved back a tier, requiring many to move outdoors and restaurants unable to offer indoor dining. He said the spikes are not occuring in the business sector, and doesn’t think businesses should be punished.

James Cooper, president of the Vallejo Chamber of Commerce, said in late October that such tight restrictions on the cusp of the holiday season would have dire consequences.

“A return to a more restrictive tier would be a step backward that will devastate small local businesses just as the holiday shopping season is about to get under way,” he said.

‘No longer a drift’ in Santa Clara

Santa Clara County has been in the orange tier for five weeks, and its case rate of 4.1 per 100,000 population is far below Napa’s — but just past the benchmark of 4 that would place it in the red tier. 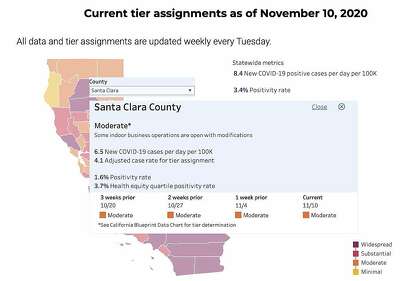 On Monday, the Santa Clara County Public Health Department held a news conference to discuss the recent surge in cases that could set back the county’s reopening.

“Our patterns are beginning to look much like they look in the rest of the country, the state and the region,” said Health Officer Dr. Sara Cody.

Cody used charts to show that at the beginning of October, the average number of coronavirus cases was in the double digits, and by mid-October, cases began to “drift” up.

“In the last week it is no longer a drift,” she said. “Our cases are surging up and that is cause for concern.”

Cody said it is not clear what is causing the uptick. However, she said, “We are about a week plus out from Halloween, it’s possible that we are all experiencing pandemic fatigue as we’ve been at this for a very long time.”

She said this is similar to the uptick in the summer, which is “largely younger adults between the ages of 18 and 34,” and noted they are closely watching individuals in the 25-to-29 age range.

Many counties have said public outreach is their main tool as they try to rein in case rates.

In Napa, steps include putting continued efforts into testing, mapping and analyzing COVID-19 hot spots, and working with community groups to increase outreach to at-risk populations and provide support to essential workers.

The county is also working with chambers of commerce on public education, starting a “safe holiday” campaign, and working with schools on case and contact tracing.

Napa County Supervisor Alfredo Pedroza on Tuesday urged the community not to let its guard down and not to give up.

“We’ve done earthquakes, we’ve done floods, we’ve done fires, and now we have a pandemic, and this is by far the hardest,” he said. “We’re one community, we’re resilient as heck.”

Phillys coronavirus vaccine is flowing to the suburbs – WHYY

Phillys coronavirus vaccine is flowing to the suburbs – WHYY