COVID-19 hospitalizations are surging again in the Houston area, according to the latest data, an inauspicious development as the Thanksgiving holiday approaches.

Daily COVID-19 hospital admissions nearly doubled this week compared to one month ago, the Texas Medical Center reported Friday, a reflection of the coronavirus’ increased spread. The number of confirmed cases began creeping up a month ago, then spiked to higher levels in the last two weeks.

“It feels like we’re sitting on an explosive, the fuse lit, waiting for it to explode,” said Dr. Esmaeil Porsa, president of the Harris Health System, whose safety-net hospitals were overwhelmed during the summer when the spread was out of control in Houston. “This is the time to sound the alarm, that we curtail behavior that could make us become the next El Paso.”

William McKeon, president of the Texas Medical Center, added that COVID-19 hospitalizations are “the ultimate truth, the sign the spread that began two weeks before is real. When someone is sick enough that they need to be hospitalized, you can’t hide that.”

Medical center leaders plan to launch a messaging campaign next week emphasizing the need for families to create their own “holiday bubble,” like the one the NBA implemented for the playoffs, McKeon said. Each member of the bubble should assess their risk, get tested before the gathering, quarantine before traveling and wear masks when traveling brings them in contact with people.

The medical center’s COVID-19 reports this week show an average of about 140 new daily COVID-19 admissions among its member hospitals in the area, up from around 100 a week ago and 75 a month ago. The number had held steady around 75 for a couple months before the recent increase.

Houston hospital leaders said doctors and staff are able to manage the increasing flow of COVID-19 admissions for now but worry that a continuation of the trend could bring a return to levels like those seen in during the middle of the summer, a time of great strain in the medical center. They noted the trend has already begun in other parts of the state, nation and world and projections call for it to reach a crisis point this winter because of the cold weather and people gathering indoors for the holidays. 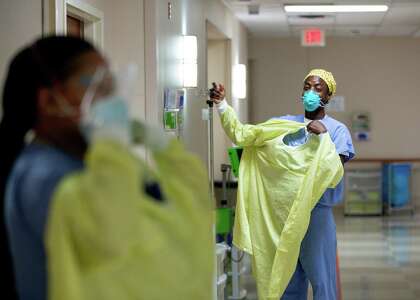 Hospitalizations aren’t the only concerning metric in the medical center report. The COVID-19 positive test rate among medical center hospitals is now 5.2 percent, up from 4.4 percent a week ago and 3.4 percent a month ago. And the amount of COVID-19 transmission, the so-called Rt rate, remains above 1, the level at which spread increases. The rate has now been above that benchmark for about five straight weeks, after a sustained period in the late summer significantly below 1. An Rt below 1 means the virus is burning out in a community.

“This week’s good news about the vaccine was cause to celebrate, a glimpse of the light at the end of the tunnel,” said Boom. “But it’s a much longer tunnel than we’d like, certainly several more months. The way it’s going, it’s going to be a challenging trip through the tunnel. During that time, people need to do everything they can to hold the virus at bay.”

High blood pressure: The best dietary mineral to lower BP & how to include it in your diet – Express