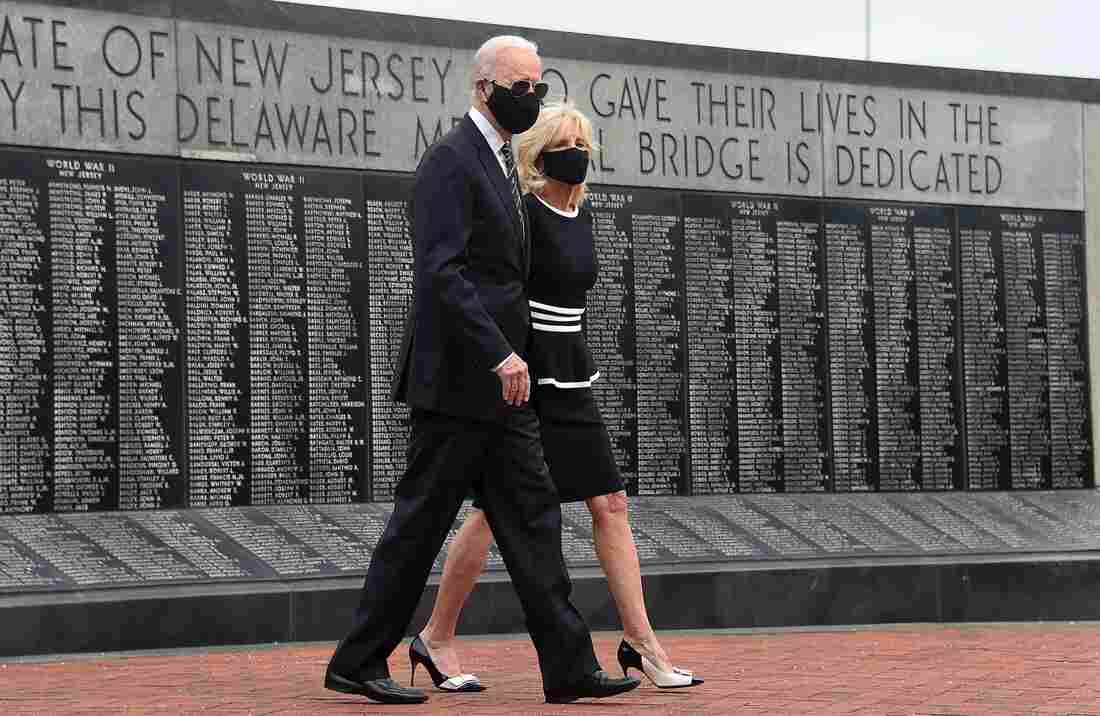 Joe Biden and his wife, Jill Biden, wear masks as they mark Memorial Day. The president-elect has consistently worn masks amid the pandemic, and he’s already talking to governors about trying to implement a national mask mandate. 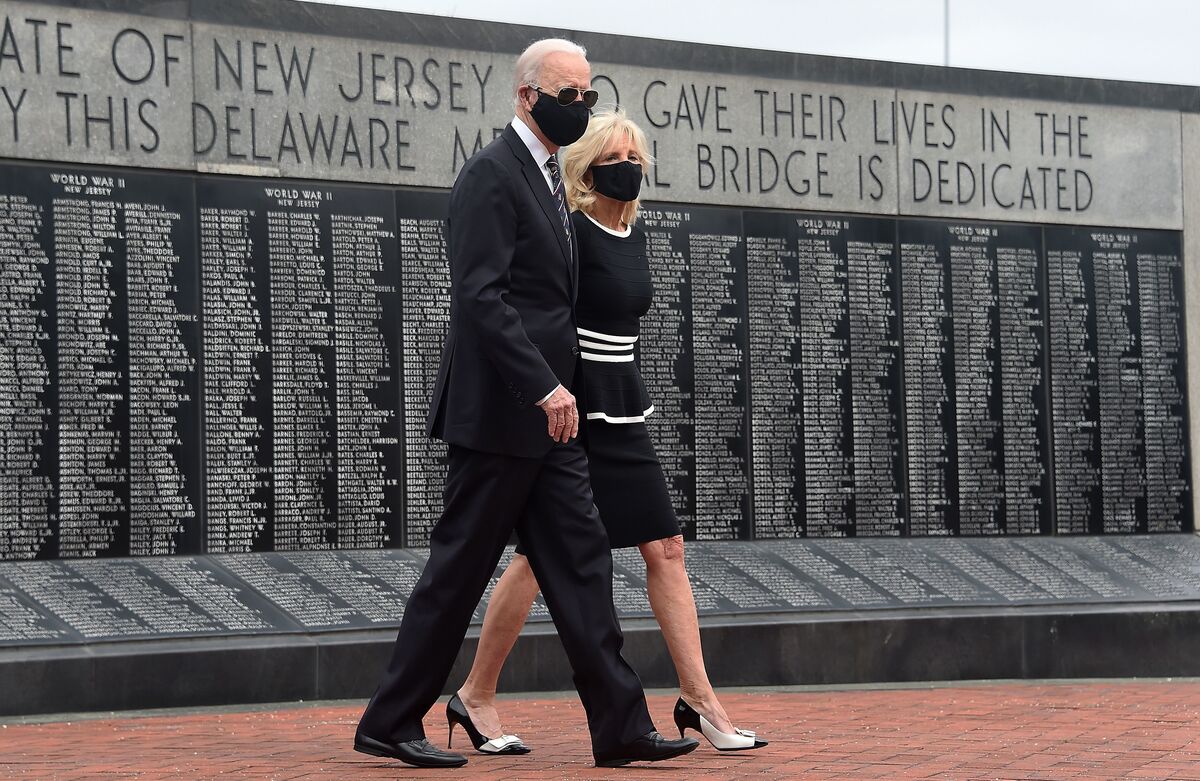 Joe Biden and his wife, Jill Biden, wear masks as they mark Memorial Day. The president-elect has consistently worn masks amid the pandemic, and he’s already talking to governors about trying to implement a national mask mandate.

It was Memorial Day when then-candidate Joe Biden made his first public appearance since the coronavirus shut down in-person campaigning. Before he went out to place a wreath at a veterans memorial in Delaware, Biden and his team decided he would wear a mask. It wasn’t a difficult decision, an aide said when asked about the choice.

“Wearing one of these masks when you’re outside is not a partisan issue,” Biden said a couple of days later during a livestreamed event. “It is a matter of protecting other people.” New guidance from the Centers for Disease Control and Prevention also indicates it protects the wearer of the mask as well.

The same week as Biden’s remarks, President Trump retweeted someone mocking the Democrat for wearing a mask and teased a reporter for wearing one at a press conference, asking him to take it off to hear him, and when he didn’t, saying it was “because you want to be politically correct.”

The lines were drawn.

In the months since Memorial Day, face masks have become a potent symbol of the political polarization over the coronavirus in the United States. The division shows up in polling. Gallup found that while a clear majority of Americans say they’re “highly likely” to wear masks in public indoor spaces, Republicans are less likely to do so.

As the president-elect prepares to take office in January, he’s already talking to governors about trying to implement a national mask mandate, or as close to it as possible. But to succeed, Biden is likely going to need to find a way to depoliticize masks.

That’s going to be tough because “it is so ingrained in our collective psyches,” said Frank Luntz, a Republican pollster. Luntz said the key to breaking through resistance is not to preach, but to listen, and to personalize it.

In recent days, as the coronavirus surges to record levels, governors all over the country have held press conferences delivering difficult messages about restricting the size of gatherings and urging people to celebrate Thanksgiving only with those in their households. They’ve announced new or expanded mask mandates, and they’ve tried out their own methods to take down the political temperature and save lives.

“Some straight talk: There are two extreme and distinct camps out there,” said Arizona Gov. Doug Ducey, a Republican, as he announced new COVID-19 restrictions last week. “Most of the public isn’t part of either camp. And by the way, neither am I. Masks work. Please wear them.”

As he pleaded with residents to wear masks, Ducey walked through the science, highlighting the new CDC information about masks helping to protect the wearer, too. 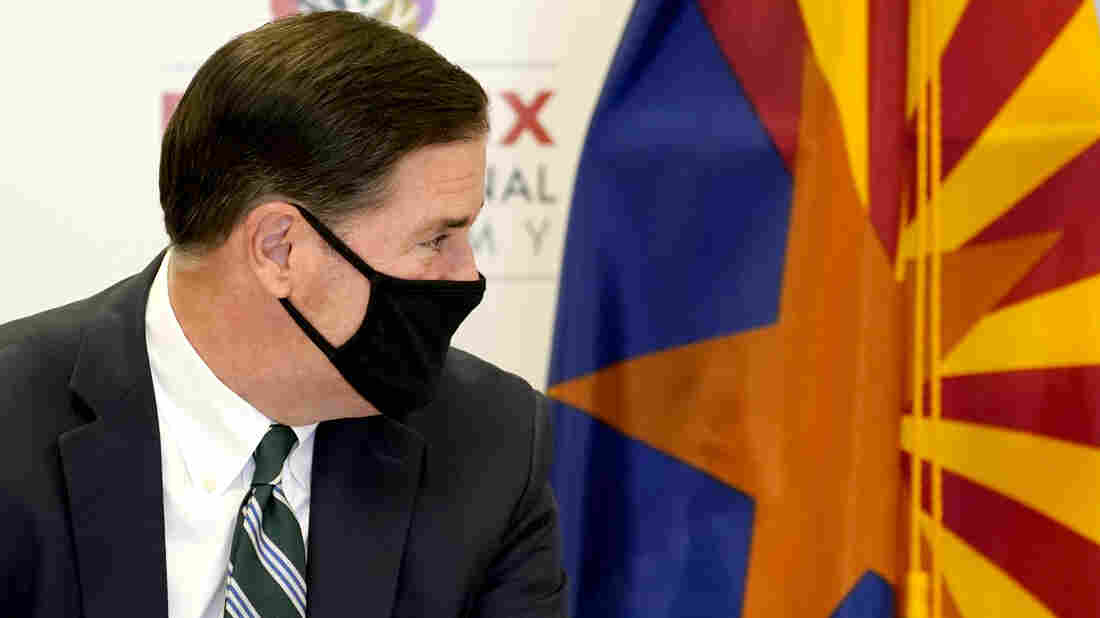 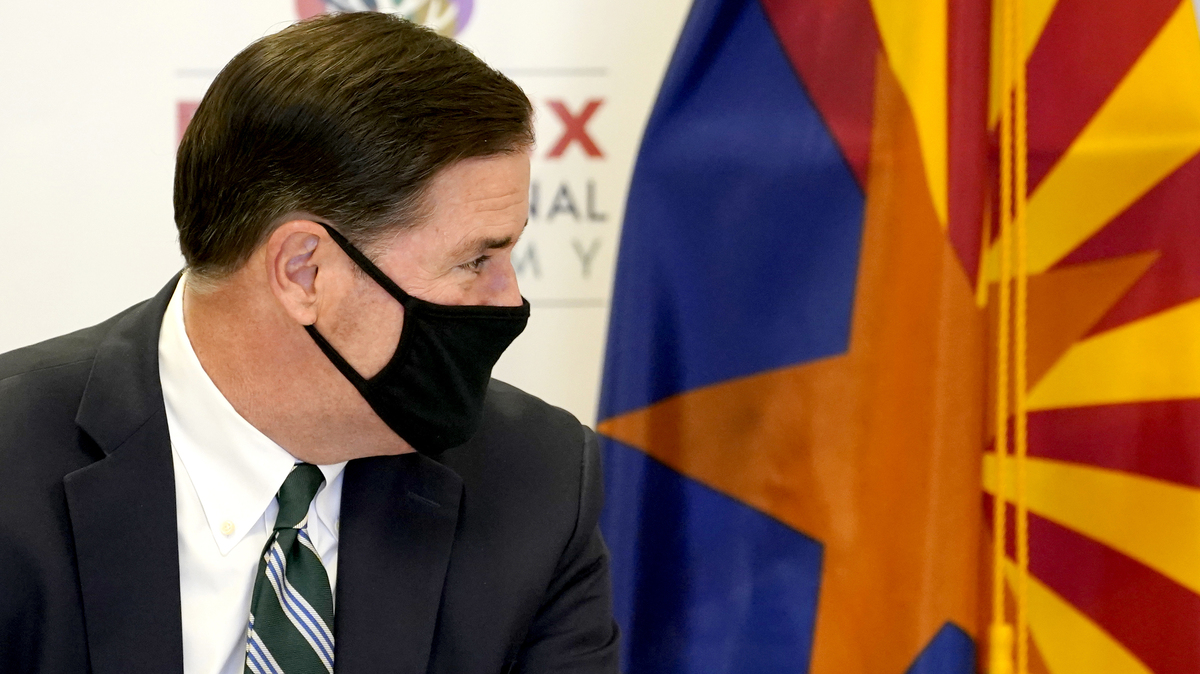 In neighboring New Mexico, Gov. Michelle Lujan Grisham, a Democrat, was early to require masks. So she’s had plenty of time for creative thinking about getting people to go along with a mandate they don’t like.

“You know I said, ‘Masks are not political. If you want to do something political, write it on your mask,’ ” Lujan Grisham said in a phone interview. She equated it to sports jerseys. Why not use your mask to represent what you believe in too?

“I do think that actually motivates people to wear them because you get to make a statement,” she said.

And right then, her communications director, Tripp Stelnicki, jumped on the line with an example. He saw someone in the state wearing a mask that said: “My governor is a dummy.”

“So I would argue that that makes me pretty smart if that got you to wear a mask,” said Lujan Grisham, who said she is cool with just about any message short of hate speech, as long as someone is wearing a mask.

Along the same lines, Minnesota Gov. Tim Walz, also a Democrat, said at a recent press conference that he wants people to wear masks “and stay healthy if for no other reason that it’ll keep you healthy to vote against me in two years.”

In an interview, Walz explained he’s trying to give people permission to say they disagree with him while still actually wearing a mask.

He said when people complain to him about the mask mandate in his state (which happens all the time) he asks, “Why would you think I enjoy this at all?” He said he hates masks as much as everybody else.

“None of these decisions is politically popular,” Walz said. “I feel like John Lithgow in Footloose — ‘can’t dance, can’t do this, gotta do this’ — and I just am that guy all the time.”

He knows pandemic fatigue is real, he knows people are tired of being bombarded with the data and the science, and he’s convinced they are tired of hearing it from him. So he’s trying to bring new faces to his press conferences, like hospital directors, who can talk directly about what they are seeing.

But Walz remains hopeful. He said with vaccine progress putting a real light at the end of the tunnel, and COVID-19 raging out of control in frightening ways, he thinks there is a new receptiveness to masks — or at least he hopes there is.

For his part, Biden has consistently worn a mask and has stuck to a consistent message. He tweeted last week: “Wearing a mask isn’t a political statement — it’s a patriotic duty.”