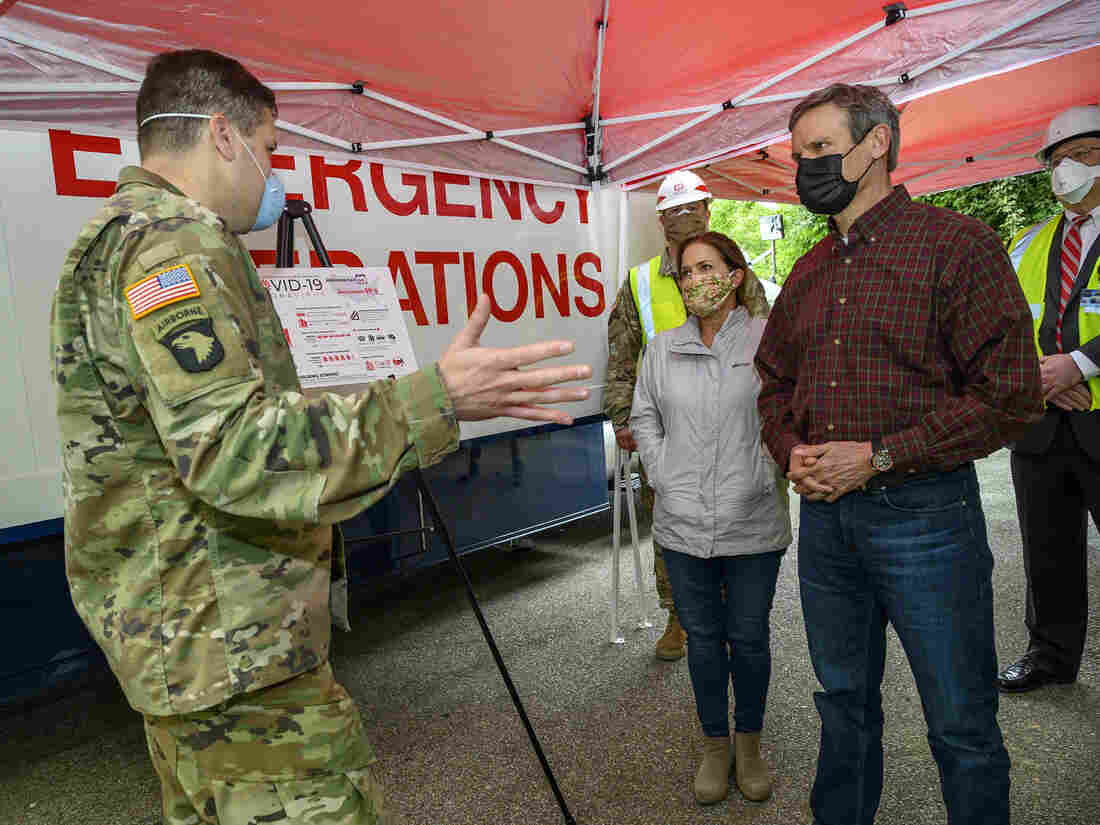 Tennessee Gov. Bill Lee (right) tours a temporary hospital site in April with his wife, Maria Lee. The overflow hospital, intended to help with the surge in COVID-19 hospitalizations, won’t be able to take patients if there aren’t additional doctors and nurses available to provide treatment. 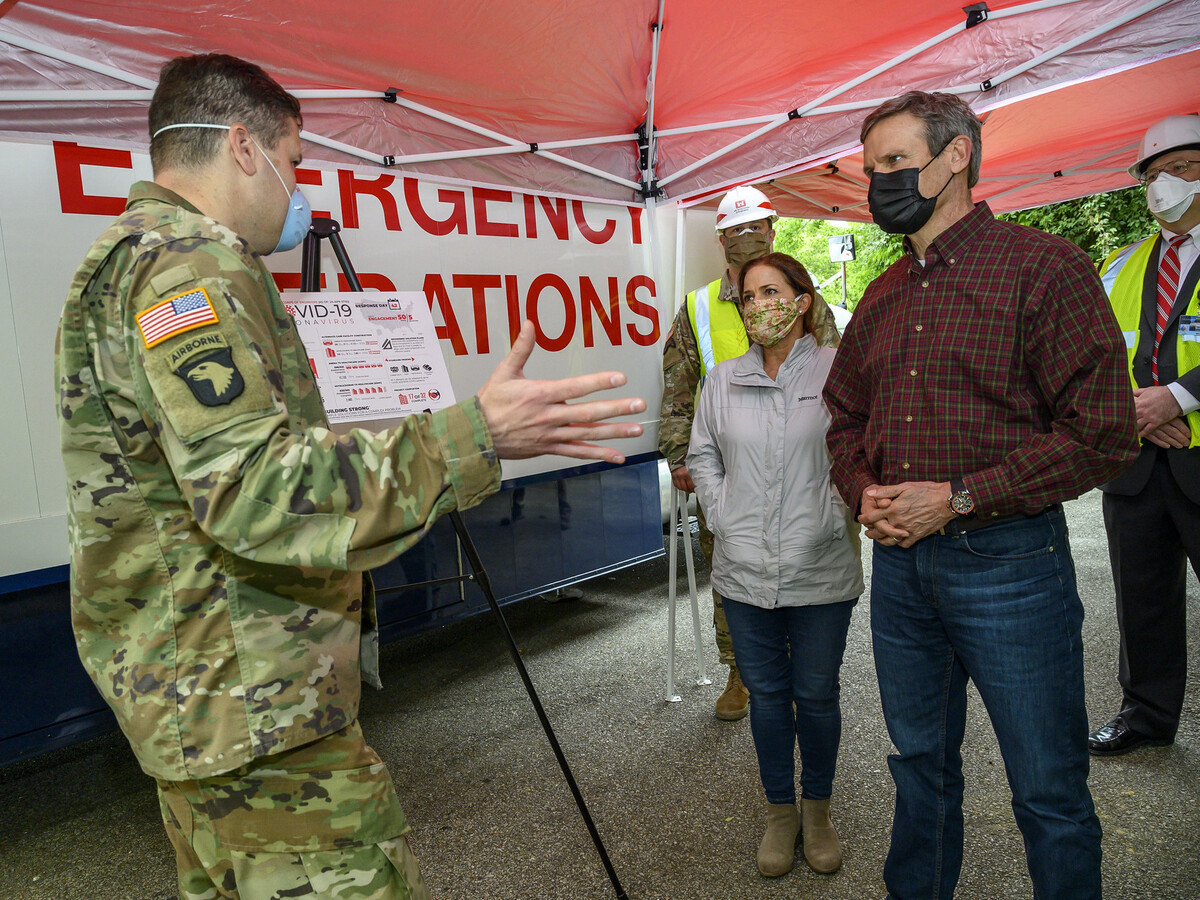 Tennessee Gov. Bill Lee (right) tours a temporary hospital site in April with his wife, Maria Lee. The overflow hospital, intended to help with the surge in COVID-19 hospitalizations, won’t be able to take patients if there aren’t additional doctors and nurses available to provide treatment.

Hospitals in much of the country are trying to cope with unprecedented numbers of COVID-19 patients. As of Sunday, 93,238 were hospitalized, an alarming record that far exceeds the two previous peaks in April and July, of just under 60,000 inpatients.

But beds and space aren’t the main concern. It’s the work force. Hospitals are worried that staffing levels won’t be able to keep up with demand as doctors, nurses and specialists such as respiratory therapists become exhausted or, worse, become infected or sick themselves.

The typical workaround for staffing shortages — hiring clinicians from out of town — isn’t the solution anymore, even though it helped ease the strain early in the pandemic, when the first surge of cases was concentrated in a handful of “hot spot” cities such as New York, Detroit, Seattle and New Orleans.

Recruiting those temporary reinforcements was also easier in the spring because hospitals outside of the initial hot spots were actually seeing fewer patients than normal, which led to mass layoffs. That meant many nurses were able — and excited — to catch a flight to another city and help with treatment on the front lines.

In many cases, hospitals competed for traveling nurses, and the payment rates for temporary nurses spiked. In April, Vanderbilt University Medical Center in Nashville had to increase the pay of some staff nurses, who were making less than newly arrived temporary nurses.

In the spring, nurses who answered the call from beleaguered “hot spot” hospitals weren’t just able to command higher pay. Some also spoke about how meaningful and gratifying the work felt, trying to save lives in a historic pandemic, or the importance of being present for family members who could not visit loved ones who were sick or dying.

“It was really a hot zone, and we were always in full PPE and everyone who was admitted was COVID positive,” says Laura Williams of Knoxville, Tenn., who helped launch the Ryan Larkin Field Hospital in New York City.

“I was working six or seven days a week, but I felt very invigorated.”

After two taxing months, Williams returned in June to her nursing job at the University of Tennessee Medical Center. For a while, the COVID-19 front remained relatively quiet in Knoxville. Then the fall surge hit. There have been record hospitalizations in Tennessee nearly every day, increasing by 60% in the past month.

Health officials report that backup clinicians are becoming much harder to find.

Tennessee has now built its own field hospitals to handle patient overflows — one is inside the old Commercial Appeal newspaper offices in Memphis, and another occupies two unused floors in Nashville General Hospital. But if they were needed right now, the state would have trouble finding the doctors and nurses to run them because hospitals are already struggling to staff the beds they have.

When it comes to staffing, the coronavirus creates a compounding challenge.

As patient caseloads reach new highs, record numbers of hospital employees are themselves out sick with COVID-19 or temporarily forced to stop working because they have to quarantine after a possible exposure.

Some states, like North Dakota, have already decided to allow COVID-positive nurses to keep working as long as they feel OK, a move that has generated some backlash. Colorado, California and Illinois have asked retired nurses and doctors to consider returning to the workforce.

In Tennessee, Gov. Bill Lee has issued an emergency order loosening some regulatory restrictions on who can do what within a hospital, giving them more staffing flexibility.

For months, staffing in much of the country had been a concern behind the scenes. But it’s becoming palpable to any patient.

Dr. Jessica Rosen is an emergency physician at Saint Thomas Health in Nashville, where having to divert patients to other hospitals has been rare over the past decade. She says it’s a common occurrence now.

“We have been frequently on diversion, meaning we don’t take transfers from other hospitals,” she says. “We try to send ambulances to other hospitals because we have no beds available.”

Even the region’s largest hospitals are filling up. This week, Vanderbilt University Medical Center made space in its children’s hospital for non-COVID-19 patients. Its adult hospital has more than 700 beds. And like many other hospitals, it’s had the challenge of staffing two intensive care units — one exclusively for COVID-19 patients and another for everyone else.

And they’re coming from as far away as Arkansas and southwest Virginia.

“The vast majority of our patients now in the intensive care unit are not coming in through our emergency department,” says Dr. Matthew Semler, a pulmonary specialist at VUMC who works with COVID-19 patients.

“They’re being sent hours to be at our hospital because all of the hospitals between here and where they present to the emergency department are on diversion.”

Semler says his hospital would typically bring in nurses from out of town to help. But there is nowhere to pull them from right now.

National provider groups are still moving personnel around, though increasingly it means leaving somewhere else a little short-staffed. Dr. James Johnson with the Nashville-based physician services company Envision has deployed reinforcements to Lubbock and El Paso this month.

He says the country hasn’t hit it yet, but there’s a limit to hospital capacity.

“I honestly don’t know where that limit is,” he says.

At this point, the limitation won’t be ventilators or protective gear. In most cases, it will be the medical workforce. People power.

Johnson, an Air Force veteran who treated wounded soldiers in Afghanistan, says he’s more focused than ever on trying to boost morale in the doctors and stave off burnout.

“What we experienced in New York and happened in every episode since, is that humanity rises to the occasion,” he says.

But Johnson says the sacrifices shouldn’t just come from the country’s health care workers. Everyone bears a responsibility, he says, to try to keep themselves and others from getting sick in the first place.