A military-led task force has warned of the potential emergence of a mutated Israeli variant of the coronavirus resistant to vaccines.

In a report for the Coronavirus National Information and Knowledge Center on Saturday, Military Intelligence recommended that due to fears over the possible development of an Israeli strain, those who have received vaccines or recovered from COVID-19 be tested for the coronavirus and be subject to quarantine requirements upon entering the country.

“The mass vaccine campaign taking place parallel to the active outbreak in Israel may lead to ‘evolutionary pressure’ on the virus,” the report said.

Nearly 2.5 million Israelis have received the first dose of the coronavirus vaccine, and over 946,000 have received both shots. Israel has set a target to vaccinate its entire eligible adult population by March. 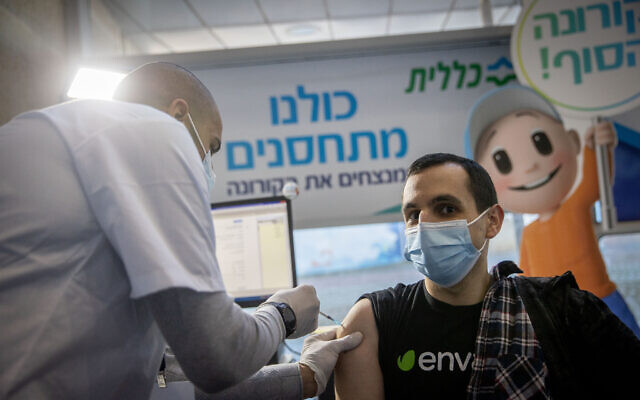 A medical worker administers a COVID-19 vaccine at a Clalit vaccination center in Jerusalem, on January 21, 2021. (Photo by Yonatan Sindel/Flash90)

According to two preliminary studies released last Wednesday, the Pfizer/BioNTech vaccine appears to be effective against the new, more infectious coronavirus variant that was first detected in Britain and has since been found in dozens of countries. The strain, known as B.1.1.7, has caused alarm among experts because of its increased ability to spread and supercharge virus outbreaks.

But it is yet another mutation, known as E484K and present in the variants detected in South Africa and Brazil, but not the one from Britain, that has experts particularly worried about immunity “escape.”

The task force report came as the British variant has spread in Israel, with experts predicting it could become the dominant strain within weeks. Israel has also seen over 20 cases of the South African variant, and is carefully monitoring for the Brazilian strain, amid fears one of the mutations will evade the vaccine protections.

The Health Ministry said on Saturday that several cases of British coronavirus variant had been discovered among pregnant women hospitalized in serious condition with COVID-19 complications.

The ministry said it took samples from 10 pregnant women and that of the seven samples they have so far completed sequencing, six were found to have the British strain.

“In light of the recent morbidity findings, pregnant women will be moved in up preference for receiving vaccines. Any pregnant woman who is interested can be vaccinated,” the ministry said in a statement.

In an effort to prevent the strains from being imported into Israel, Prime Minister Benjamin Netanyahu will seek government approval on Sunday for his proposal to suspend all passenger flights to and from Israel for two weeks. 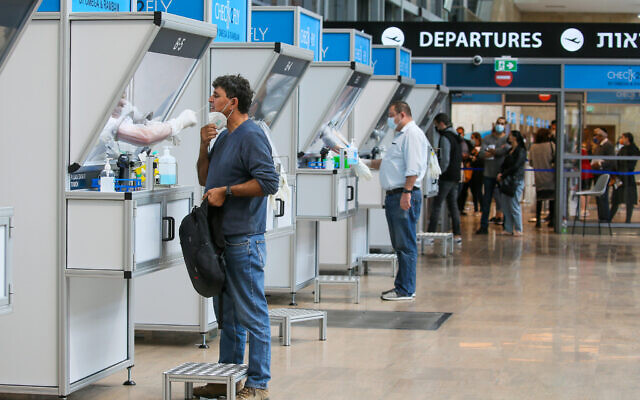 A technician collects nasal swab samples for COVID-19 at the coronavirus lab at Ben-Gurion International Airport, near Tel Aviv on December 14, 2020. (Yossi Aloni/Flash90)

Netanyahu held a meeting Saturday night with officials from the Health Ministry, the Transportation Ministry, the National Security Council, and the Civil Aviation Authority where an initial agreement was reached to essentially halt almost all flights “to prevent the entry into Israel of additional coronavirus mutations,” according to a statement by the Prime Minister’s Office.

People needing to travel may be allowed to do so “in exceptional circumstances” that would require the approval of a committee headed by the directors-general of the health and transportation ministries, according to the PMO announcement.

The proposal will be submitted for cabinet approval on Sunday.

The statement said the restrictions will come into force once approved by the government, though it was not immediately clear if a majority of ministers will back them.

Agencies contributed to this report.