In Los Angeles, Pandemic Life Depends on Where You Live – Rolling Stone

Dr. Nicole Van Groningen is exhausted. A hospitalist and assistant professor at Cedars-Sinai Medical Center in Los Angeles, Van Groningen has been on the front lines fighting Covid-19 for 11 months, and as L.A. comes down from its worst surge in cases since the pandemic began, she’d spent the final two weeks of January at the hospital’s overwhelmed intensive care unit.  Even as cases had begun to plateau, morale is bleak.

“Everyone is on edge, it’s a feeling of constantly bracing ourselves for things to get worse. And the patients at the ICU are so sick for so long,” she says with a slight sigh. It’s late January, and the area is averaging more than 40,000 cases per week. The hospital’s ICU is 33 percent past maximum capacity. “They get worse, and they don’t bounce back like we usually see. We’re used to having the skills we can use to make most people better. We know we’re doing everything we can, but it takes a psychological toll when we can’t heal these people.”

Dr. Van Groningen’s description of fighting Covid is frightening. Patients come in scared, anxiously waiting to see if their symptoms eventually pass, or if they’ll elevate enough to go to the ICU, where chances of survival are far lower. “Our patients come in terrified. They’re really scared when they first come into the hospital having trouble breathing, we get them better after getting them some oxygen,” she says. “Then sometimes even with that, they start to progress on and get short of breath again. Once you bring up taking them to the ICU, it’s palpable how scared they are.”

A few miles away, the virus’s lethal toll is barely visible. Just days before my conversation with Dr. Van Gronigen, I’d parked near the entrance to Runyon Canyon Park, a popular hiking spot overlooking the city from the Hollywood Hills. It’s quiet, even peaceful. A couple of teenagers get out of a Jeep, unmasked and standing side by side as they get ready to start out on the trail. If there’s such a thing as a feeling of normalcy during the devastating Covid-19 health crisis, it’d be this.

Across the country, the pandemic has exposed deep seated divides in our communities, with black and Latin populations contracting the disease and dying at twice the rate of white people, according to the Centers for Disease Control and Prevention. Nowhere is that clearer than in Los Angeles, where depending on one’s zip code, the most recent wave of the coronavirus outbreak was either a slightly removed talking-point during Zoom calls — something to wait out until dinner parties and vacations pick back up again — or the brutal plague that destroyed families and communities. Ten of the richest neighborhoods in Los Angeles County combined, representing about 323,000 people, have about 700 fewer confirmed coronavirus cases than just the city of Compton (95,000 people) alone.

That’s far from coincidental. The richer, whiter cities are more sparsely populated, have less overcrowding and have more residents who can work from home and travel by car, crucial components in infection rates. Meanwhile, those living in poorer communities rely more on public transportation and have been forced to leave their houses to their jobs, bringing the virus back to their families. After a brutal two months of infections and death in the holiday season, Los Angeles is recovering, with confirmed cases, hospitalizations and deaths continuing to drop off from their heights in late December and early January. But as the city slowly comes back, the disproportionate toll is clear.

Seeing the daily Covid statistics and hearing anecdotes of horror on the frontlines from the ICUs is disorienting. While an L.A. resident died every 10 minutes over the virus during the peak of the surge, residents could still clamor at shopping centers for the holidays. Los Angeles County’s reinstated safer at home order didn’t begin until three days after Black Friday.  As cases skyrocketed, the county took preventative measures, ending outdoor dining and closing businesses like hair salons in late November, and residents were told to avoid leaving the home when not essential. Yet Los Angeles never truly reentered a lockdown. 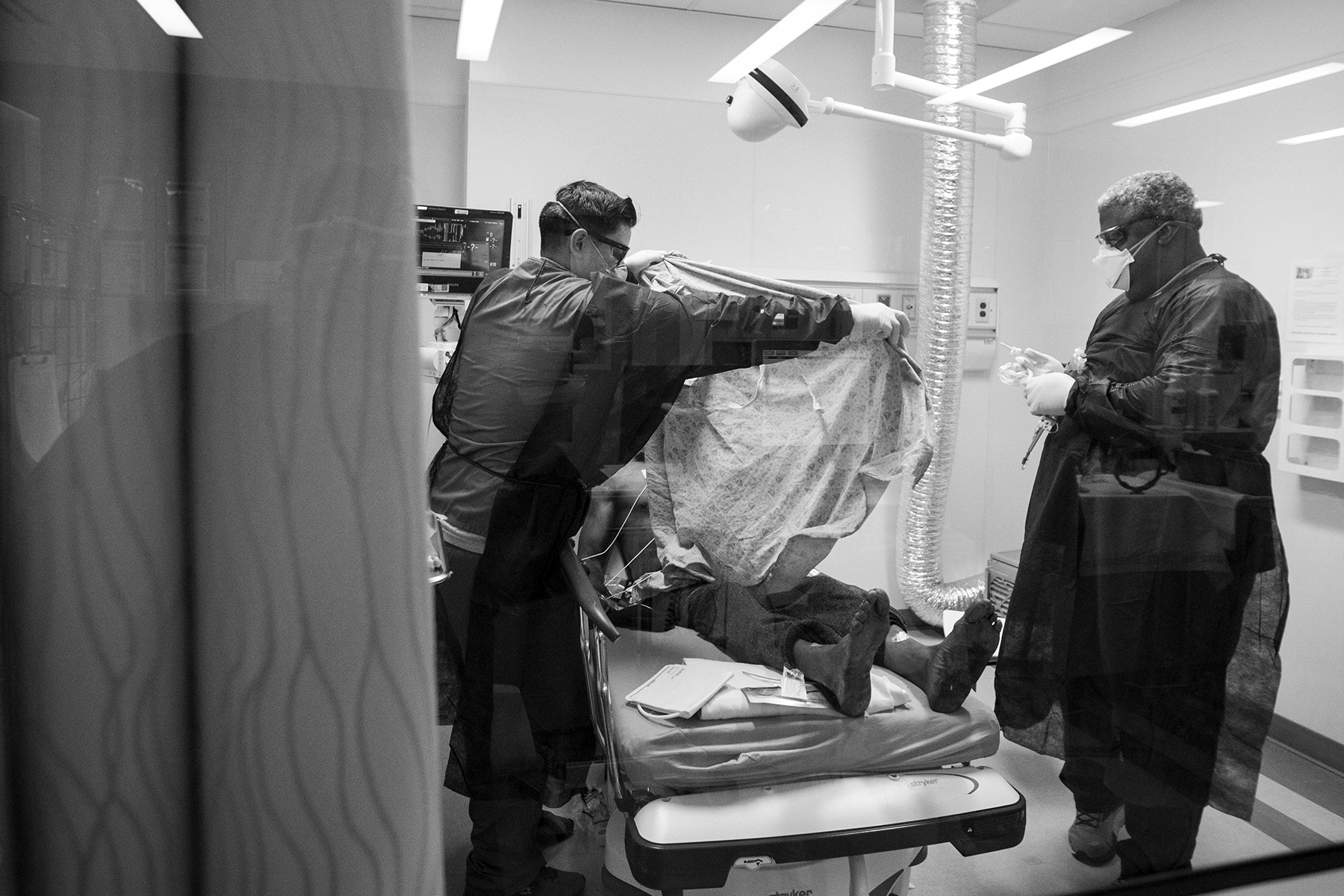 A stark contrast to the very beginning of quarantine, where traffic was nonexistent and the city seemed empty, during L.A.’s deadliest period, shopping malls, jewelry stores, book shops, and most other sorts of retail establishments were open at limited capacities. The city and state needed to also support a significantly wounded economy, with California having the third highest unemployment rate in the country in December, according to the Bureau of Labor Statistics, and it faced ongoing pressure from businesses that had been straining for months. Restaurants from across the state sued California Governor Gavin Newsom over the dining restrictions, and Newsom faces a small but notable recall effort from California Republicans in light of the state’s response to the virus.

Limited capacity openings only added a further sense of normalcy, and what came of it was a confusing message to Angelinos for what was expected and what was allowed.

Martin Luther King Jr. Community Hospital in south Los Angeles is surrounded by majority black and Latino neighborhoods like Watts, best known for the Watts Riots of 1965, and it has become a symbol for how the coronavirus has disproportionately hit those communities. The relatively small, 131-bed hospital has been well over capacity since December, and as MLKCH CEO Dr. Elaine Batchlor says, her hospital has served more Covid-positive patients than hospitals four times its size. Even as the surge has considerably fallen in February, the hospital’s ICU remains 100 percent full.

The community MLKCH serves was uniquely vulnerable to a pandemic. Access to healthcare is more limited, and underlying health conditions are more common. Diabetics, for instance, are one of the highest risk groups for severe Covid cases, and South L.A. has three times higher diabetes rates than any other part of the state, Batchlor says, and diabetetic amputations and wounds are the hospital’s number one surgery. “Many of our patients are on the front line, and if it continues to spread and they are exposed to it on the dot, they live in crowded housing, they go home and they give it to the rest of the family. We’re seeing entire families getting sick, losing important members of the family.”

The hospital has outfitted its gift shop to treat more patients, doubled up rooms, converted an entire floor as a critical care unit and set up five triage tents outside the hospital, where patients are treated and boarded until there’s space inside the hospital.

As Batchlor says, the neighborhoods her hospital serves were long the most likely to face the brunt of any health emergency, and she hopes the pandemic will underscore the need for better resources to impoverished communities across the country going forward. “Even before Covid came along, we had a public health crisis in our community, and it’s an epidemic of poorly treated chronic illness. [Covid] then preyed on a vulnerable population and has hit them much harder than any others,” Batchlor says. “Over the long term, we need to create better access and quality health care for underserved communities. We’re all connected. I hope that the pandemic has shown us that we’re all suffering.”

Batchlor and Van Groningen see both sides of Los Angeles’s Covid story each day. After treating the county’s sickest patients, they go back to their homes in Westchester and Santa Monica, where incomes are higher and cases are lower. Several times, Batchlor would come home to see her neighbors throwing social events and disregarding the city’s mandated protocols, something she says has felt “demoralizing.”

“It feels really frustrating and sad that people don’t take it seriously enough and aren’t willing to make the smaller sacrifices required to keep other people in the community safe,” she says. “And it does make me angry when I think of how hard we are working to treat people who are being impacted by covid. Earlier in the pandemic, when I saw people out and about without a mask on I would say something. I stopped because it was just happening so many times.”

Van Groningen goes to and from work passing by the beach in Santa Monica, where particularly on weekends, she says, it’s hard to discern any difference from a pre-covid world. Masklessness isn’t rampant but it’s still noticeable, she says, and she still sees enough people likely from different households getting too close for comfort. Finding a medium between keeping cases down supporting the economy and residents’ declining mental health nearly a year into a pandemic is a difficult task, she says, but forsaking the former is dangerous. As many epidemiologists and health experts have told the Los Angeles Times, fatigue and a decrease in social distancing practices were a commonly cited factor in the holiday season’s uptick in cases. And yet, Van Groningen is optimistic.

“I like to think we haven’t given up,” she says. “Through my experiences with friends and people I’m close to, I want to say that most people are still trying to do the right thing. But there’s a disconnect. I think that sometimes people are confused about what the right thing is.”